The president of the North Adriatic Port Authority, Mr. Pino Musolino, speaks in Ningbo, China, at the fifth edition of the International Cooperation Forum of the ports of the Maritime Silk Road.
Only representative of the national community of the port presidents in attendance and only Italian to speak at the themed round table on the sustainable development of maritime routes, President Musolino is also chair of the panel on the topics of inclusivity along the Silk Road, having accepted the invitation of the Provincial Authority of the ports of the Zhejiang region that includes the ports of Ningbo and Zhoushan, fundamental legs in the route of the Maritime Silk Road that extends to Italy.

Always a supporter of a bi-directional development of trades between Europe and China, further to a rebalancing of the relationships that would allow Europe and Italy to at least equal the bargaining power of the Asian giant, president Musolino brings the experience of the Venetian port that, as the primary hub of the European infrastructural network TEN-T, is one of the main points of contact with Asia in the context of the Belt&Road Initiative. The results of this, aiming at creating added value for the reference territory and supporting the Veneto industrial production, have started emerging in recent months with the reconfirmation of the ocean route operated by the consortium Ocean Alliance that connects on a monthly basis the Far East with the Lagoon; the signing of a MoU with the (Chinese-led) port authority of Piraeus and the creation of a weekly feeder connection Piraeus-Venice operated by Cosco Shipping. The forum under way in Ningbo is also an opportunity to strengthen the relationships with leading players of international shipping already involved in cooperation with Venetian ports and to create new bonds.

As the president of the ports of Veneto, Mr. Musolino intends to support the importance of strengthening maritime connections between Far East and Europe via the Northern Adriatic Sea, also to reduce the trade environmental impact.

“The correct intermodal development of the Maritime Silk Road will permit to decarbonise the supply chain, cutting the CO2 emissions by over 100 kg for every container moved across the Northern Adriatic Sea instead of the Northern Range” – President Musolino declares at the end of the meeting. “Sustainable development must become a driver in the planning of port activities and the involvement of port-cities is an important step to improve the relationships with residents in view of a collaborative development. Renewable energy sources and bio-fuels must enter the ports, that shall be increasingly served by digital infrastructures and connected with intermodal connections exploiting railway transport and internal waterways”. 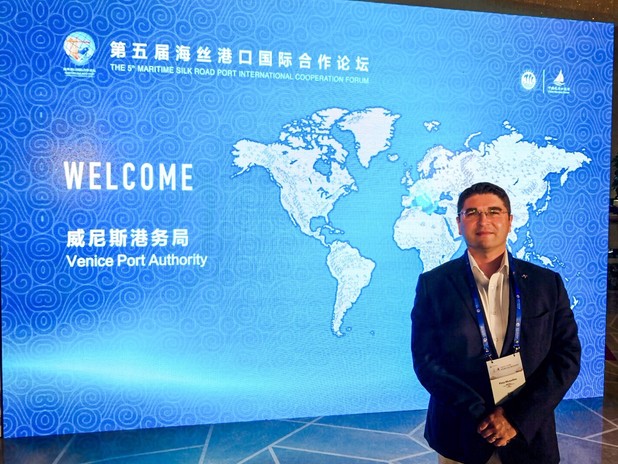 Pino Musolino, the President of the North Adriatic Port Authority