Home / Silk Road: the Chinese port of Tianjin visits the port of Venice

Silk Road: the Chinese port of Tianjin visits the port of Venice

In the wake of the agreement signed in July 2016 with the port of the lagoon, a delegation of the Chinese port of Tianjin has visited the port of Venice, first with a technical tour of Vecon, container terminal of the PSA Group, and then with an institutional meeting at the venue of the Port System Authority.

At the helm of the delegation, Mr. Chu Bin, the President of the largest layover of Northern China, visited by President Xi Jinping last 17 January, when he declared that in a matter of years he would make Tianjin “the first-in-class port worldwide”. Mr. Chu Bin and President Musolino last week were both at the al V International Cooperation Forum of Ports along the Silk Road held in Ningbo.

“Every day we’re engaged in weaving relationships that may turn into business agreements with the East in the context of the new maritime Silk Road in order to create value and employment in our territory in an equal relationship with our Chinese partners – the president of AdSP, Pino Musolino, explains –. In the eyes of the international operators, Venice is a fundamental freight hub for a quick access to the rich European markets and to tap into the highest-added-value products of the Italian manufacturing industry. It’s our intention to strengthen the commercial-industrial layover of Porto Marghera in synergy with Chioggia to proactively seize all the opportunities that will emerge from the deployment of the BRI Chinese strategy”.

The port of Tianjin handles containers equal to 16 million TEUs p.a. and its freight trade amounts to a total of 446 million tonnes. In the 129 square-km large port all types of cargo are handled and the cruise sector is also taking off.

As the reference port of an area covering 52% of the Country and 30% of the population, the Chinese interest in Venice is to interact with its area of influence, that is North Eastern Italy and central Europe, considered valuable for the high-quality products of the manufacturing industry.
The interest of shipping companies is also marked by the presence of Johnson Cheng, President of the Evergreen Shipping Agency-Italy, who has accompanied the Chinese guests in their visit.

The meeting ended with the invitation by the Chinese delegation to visit the port of Tianjin to share best practices and development projects and, above all, to start the enforcement of the Memorandum signed by the two ports in 2016 providing for “the mutual undertaking to increase trade and to improve the performances of the partner ports”. 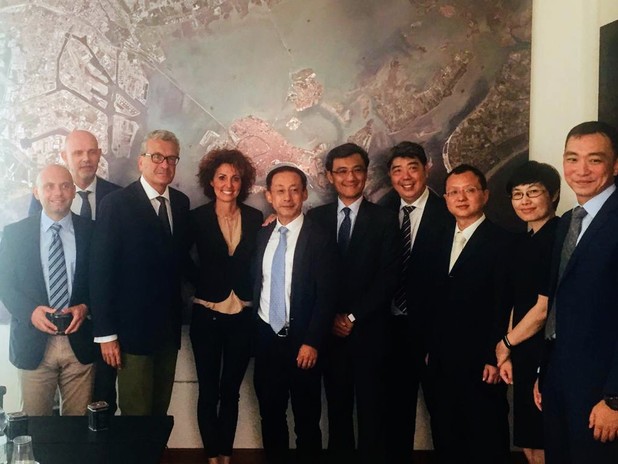 The Chinese port of Tianjin visits the port of Venice