The Venice Port Authority at the 2017 Fruit Logistica Berlin

Almost 3000 exhibitors and over 65.000 visitors, all interested in the "fresh fruit and vegetable” business, will be in Berlin.
From 8 to 10 February 2017 there will be the opportunity to promote Venice, as a perfect gateway for the trade of perishable products between North Africa/Middle East, not only for its geographical position, but also and above all thanks to terminals and facilities equipped for the management of products which require controlled temperatures.

Venice, indeed, is working to build an actual intermodal corridor (ship + train) for the transportation of “perishable” goods to Northern Europe, one of the three “Fresh Food Corridors” (the other two pass through the ports of Koper and Marseille) carrying agri-food goods from Israel-Jordan-Palestine to the main North-European logistic hubs.

Last 11 May, in fact, the first “pilot” controlled-temperature train left from Venice to Rotterdam, carrying  fresh goods imported from the Middle East in just 32 hours, allowing for a total saving of over 5 ship days, compared to sea transport, and ensuring constant monitoring of the trip, the temperature and of the entire cold chain.

The progress of the project will be presented in Berlin in a highly qualified setting, giving emphasis to an initiative looked with much interest by the European Union that funded it with 10 million euros - 1.5 millions of which invested in Venice – for its unique value of “green bridge between Mediterranean and Northern Europe” and for the innovative drive of the experimental technologies that it intends to develop. 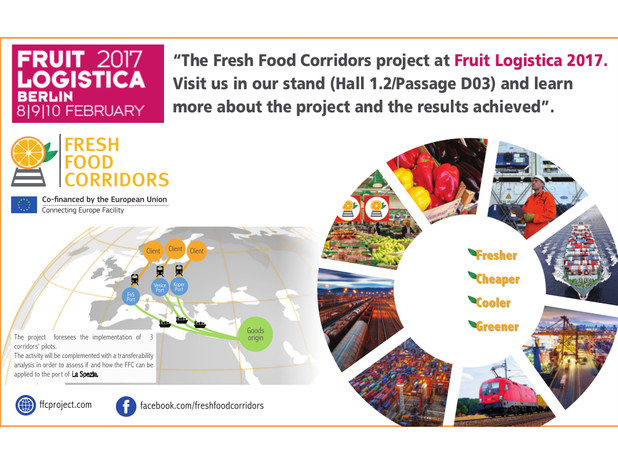