The role of ICT in the development of sea transport in the Mediterranean sea: “The results of the MOS24 and ITS ADRIATIC MULTIPORT GATEWAY projects”

The event, sponsored by RAM (Rete Autostrade del Mare, a company owned by the Ministry of Transports) is part of two important TEN-T projects: MOS 24 and ITS ADRIATIC MULTIPORT GATEWAY. The latter, financed with 1.4 million euros by the TEN-T European programme, and of which the Venice Port Authority is the lead partner, is jointly participated by all the ports of the Northern Adriatic Sea.

The project, which will end next November, is in line with TEN-T European policies aimed at harmonizing the Intelligent Transport System (ITS) services of the 5 ports involved, through a common IT platform prototype which offers shipping operators an integrated goods receipt and forwarding service in the NAPA circuit: an actual example of intangible infrastructure among logistic hubs.

The event of 30th October represents an important step for the dissemination of the project results and for the exchange of goods practices between the 2 projects financed by the same Programme.
In addition to the Venice Port Authority the Ministry of Transports, the Customs Office, the General Commander of Harbourmaster's Offices and the ports of Genoa, Trieste and Ravenna were involved. 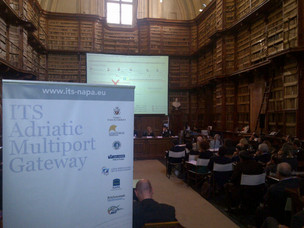 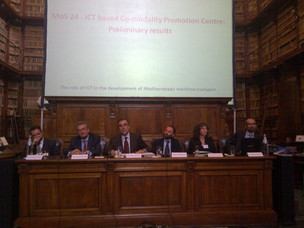