The historical-educational project “El Paron de Casa”, launched last year by the Association Lido Oro Benon, with the support and collaboration of the North Adriatic Sea Port Authority, reached its peak on 26 May.

9 Venetian schools engaged with each other in different educational activities, focused on archaeology, history, art, traditions, always in light of the strategy dictated by the 2030 UNO Agenda for sustainable development, associating to the 17 goals anecdotes of the history of the Serenissima of which no. 9, related to sustainable infrastructure, was associated to the port of Venice which sees the historic bell tower –affectionately called “Paron de Casa” by the Venetians – play the role of lighthouse in ancient times.

The project, which developed in different stages, thanks to the collaboration and support of the key local Institutions – including AdSPMAS as active partner – intends to celebrate the 110 years since the reconstruction of the bell tower (after its collapse in 1902), inaugurated on 25 April 1912, based on the fact that the bricks which were part of it came from Roman ruins “reused as secondary raw material” to stimulate younger children on the themes of circular economy and, more generally, sustainability.

The 9 primary schools involved in the cultural and educational initiative come from different areas of Venice, among islands, historical centre and mainland, representing the entire territory of the Paron de Casa. They took part in a range of initiatives focused on the value of the relationship with the sea, the history of the Serenissima and the history of St. Mark’s bell tower.
On 26 May the closing celebration was held with the schools, in the presence of local authorities and institutions, partners and supporters. During the morning, spent in Piazza San Marco, different activities were carried out: from the exhibition of the bell towers realised by the 9 schools with the aid of the Order of Engineers of Venice, to the exhibition of the works built with the “tochetini” of the bell tower, up to the educational workshops and visits to the bell tower. This was the background to the game based on the 17 UNO Sustainability goals, of which the Port Authority was also an active part: it realised the stage of the game connected with goal 9 (related also to the infrastructure) and connected to the “Port Educational” multimedia tool, created to make young people familiar with the ports of Venice and Chioggia, thanks to an interactive experience which combines information and fun.

Launched and developed in 2021, the project arrives in 2022 to organise the most representative activities and initiatives, starting from the treasure hunt organised on 11 April, on Sea and Maritime Culture Day, nationally launched in 2017 to develop love and respect for the sea especially among young people.
After the “stage” of 25 April (institutional event which celebrated 200 years since its reconstruction) on 20 May, on European Sea Day, a historical reconstruction was held of the route followed in 1902 by Gigeta (mascot of the project) to throw the first brick (collected from the collapse of the bell tower) into the sea, 3 thousand miles from the coasts of the Lido, recalling the slogan “Il mare riceve, il mare restituisce” and in the context of the Decade of Science of the Sea for Sustainable Development 2021 -2030. 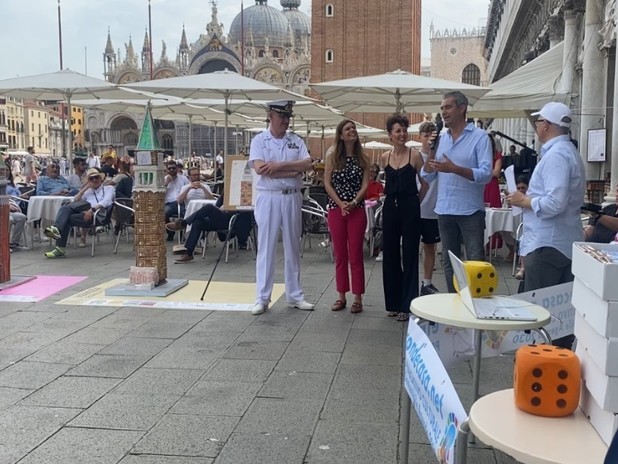 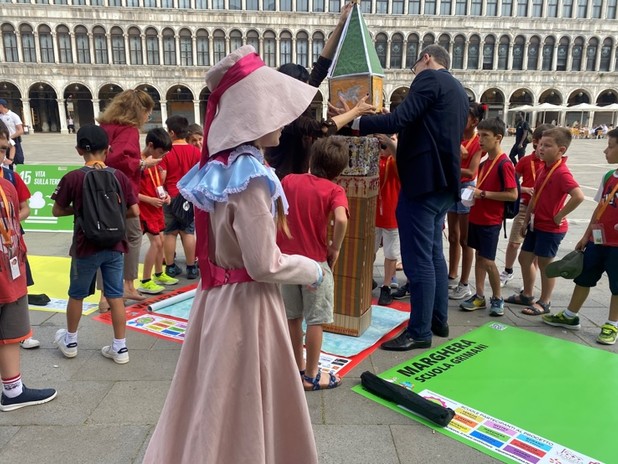