The Port of Venice has direct access to national and European roadways (Corridors I, V and the Adriatic-Baltic corridor). The Venice Port Authority is striving to improve the road access to the commercial and passenger terminals. This will also relieve roads from heavy traffic and increase their safety.

The Port of Venice includes two main port facilities: Marghera and Marittima. Cargo traffic inbound and outbound from the Marghera facility (hosting the commercial and industrial terminals, and the firms working in the port) travels down via dell’Elettricità which is directly linked to the Romea State Road (SS309-E55), the Padana Superiore Regional Road (SR11) and the motorways (A4 and A27). In turn, these roads link the Port of Venice to the Lisbon-Kiev, Berlin-Palermo, Adriatic-Baltic European Corridors.

Road access to the Marittima area of the Port and other port facilities located on the island of Venice (S. Marta and S. Basilio) is provided by the Ponte della Libertà which is well connected to the Romea State Road (SS309-E55), Padana Superiore Regional Road (SR11), the Triestina State Road (SS14) and the motorways (A4 and A27).

New initiatives will include implementing roundabouts, redesigning the intersections with major roadways, constructing a fly-over, extending the connection roads to primary routes and widening via dell’Azoto and via dell’Elettronica that lead to the port. The road system inside the Port itself will also be redesigned.

Plans to build a new roundabout are in place to more efficiently distribute traffic directed towards the Marittima. Once it has been completed, access to the Marittima and the Tronchetto will flow freely even during peak periods. The new roundabout will also provide easy access to the planned multi-storey garage and will allow a new bus stop to be positioned near the intermediate station of the People Mover monorail. 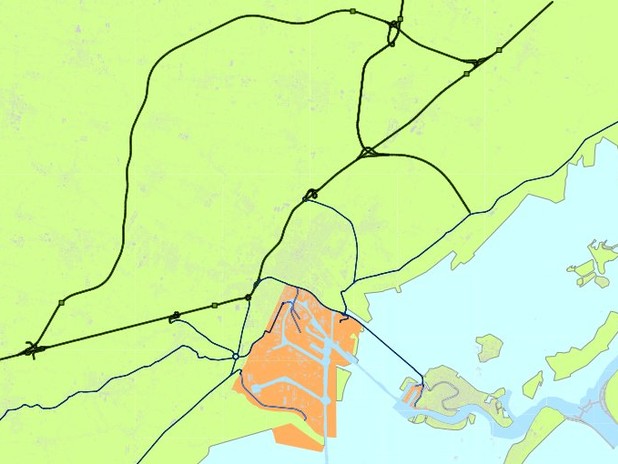