On Sunday November 27, the Port of Venice opened its large factory, Porto Marghera, on the occasion of Open Factory, as the largest industrial and manufacturing opening in Italy.
Sunday
27
Nov
2016

Indeed, Porto Marghera is a real “FACTORY” where business meets trade by virtue of its proximity to the sea, a large industrial and logistic-port hub that was and still is the driver of North East Italy thanks to 1,500 hectares of surface, 13,500 employed people, more than 1000 businesses, real estate assets worthed 6.4 billion Euro.

Normally these places cannot be approached, and to let this fascinating reality be discovered the Port of Venice promoted 4 tours during Port of Venice - Open Factory:

1. Venice Port Authority’s staff took a group of citizens for a tour “on board” that starting from downtown Venice got to the heart of the commercial Port in Porto Marghera, showing people unknown and fascinating places, location, facilities and…factories!

2. One of the most important mill in Europe - Grandi Molini Italiani - which is also the first wheat flour producer in Italy, opened its departments showing people bread magic and inviting them to join the claim “Let’s knead happiness”

3. Eni Group, the company that made possible for the Port of Venice to be the first port in the world where a conventional refinery has been converted into a bio-refinery, exceptionally opened to visitors its establishments

4. Versalis – another company of Eni Group – as a chemical industry that “turned into green” invited people to discover its innovative productions and technologies.

Over 70 companies joined Open Factory on November 27, ranking a total of 15.000 visitors: 500 people chose Venice and its Port. 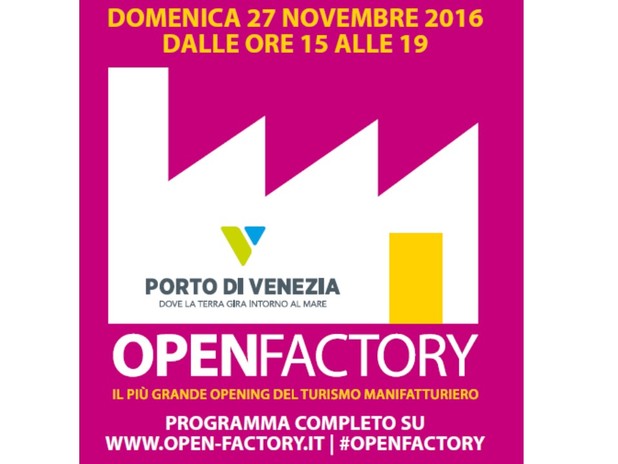