Northern Adriatic Sea and NAPA ports: which scenarios for the 2030 market? Presentation to the Venice port community

The Venice Port Authority, coordinator of the European project “ITS Adriatic Multi-port Gateway”, presented to the port community the main results of the study performed by MDS Transmodal to determine the potential capacity and the development prospects of the NAPA (association of the Northern Adriatic Sea ports) port system in the container sector until 2030. 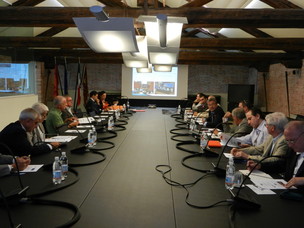 Venice port community during the presentation 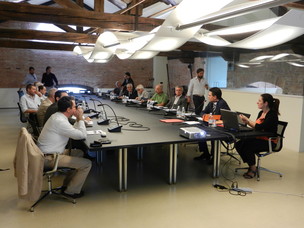 Venice port community during the presentation

The "Market survey on 2011-2030 trades of the Northern Adriatic Sea ports" was also presented; the study was performed by Technital SpA as part of the European Project TEN-T ADRIATIC GATEWAY, of which Rete Autostrade Mediterranee SpA and the Ministry of Transports are lead partners.
The joint presentation before the port community was an excellent opportunity to trigger synergies and make available to operators updated and authoritative data and analyses and to reflect on potential actions to support growth. Both studies were co-financed by the European Programme Trans European Transport Network TEN-T.

ITS Adriatic Multiport Gateway, main results of the economic study
Northern Adriatic Sea and NAPA ports: which scenarios for the 2030 market?

ITS Adriatic Multiport Gateway, results of the economic study

Northern Adriatic Sea and NAPA ports: which scenarios for the 2030 market?