New railway bridge over the West Industrial Canal in Marghera

The North Adriatic Sea Port Authority of Venice (AdSP MAS) participates in the project "Node Enhancing Waterways Bridging Adriatic - Ionian Network" - NEWBRAIN, which is co-funded by the Interreg ADRION programme. The project aims at implementing and promoting the development of efficient solutions for multimodal transport as described in work package WPT2 "Preparation of investment for the strategy implementation".

To better meet the growing expectations of the market, railway infrastructures in the port district are being improved to eliminate interference between road and rail traffic flows in Via dell'Elettricità. Further actions are being considered to meet transport demand, reduce shunting time and curb environmental pressure on the zones closest to the built-up areas.

Among other things, AdSPMAS is planning a railway bridge that will link the south-west main line of the Port to the Venice Marghera Scalo station. In 2018 this artery generated 5,543 trains (sum of arrivals plus departures) equivalent to 2.6 million tonnes handled (approximately 100 trains/week), with an annual increase of 13%. 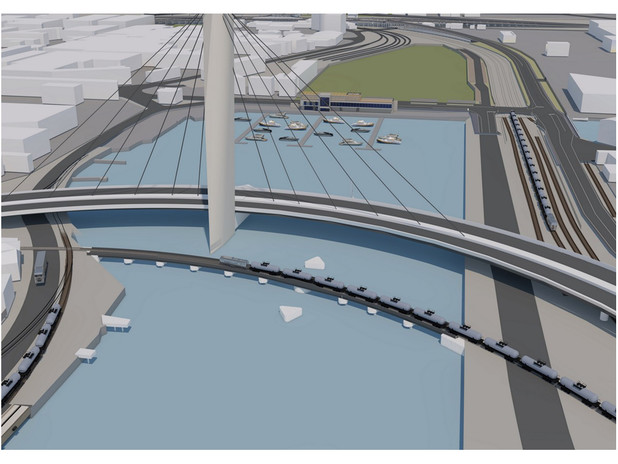 Rendering of the new railway bridge

he infrastructure will make it possible to

The plan foresees a curved bridge equipped with a non-electrified single-track railway infrastructure. It will be used by shunting trains (approx. 20-25 passages/day, including transfer trains and locomotives) with a load of up to 2200 t/train and a theoretical maximum speed of 30 km/h and will connect with the existing infrastructure on the east and west bank of the West Industrial Canal (Via Banchina dell'Azoto and Via Banchina dei Molini respectively). In Via Banchina dei Molini the plan also provides for the intersection with the rail track that runs along the West Industrial Canal, so as to serve users located there (Cereal Docks and Grandi Molini Italiani).

The bridge can open to let pleasure boats and other vessels pass through it: the opening will be over 8m wide and no height restrictions will apply. 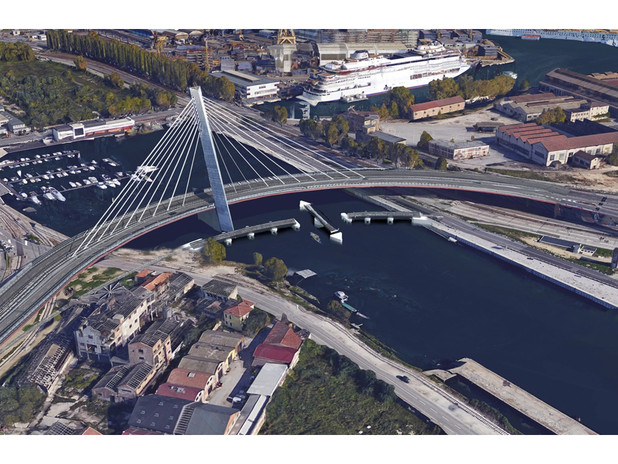 Rendering of the new railway bridge

The following systems will be implemented to operate the new bridge:

The estimated total cost for the project is approximately € 6 million.