Interventions financed by the TEN-T Programme

The Innovation and Networks Executive Agency (INEA) is the successor of the Trans-European Transport Network Executive Agency (TEN-T EA), which was created by the European Commission in 2006 to manage the technical and financial implementation of its TEN-T Programme.
INEA officially started its activities on 1 January 2014 in order to implement the following EU programmes:
•    Connecting Europe Facility (CEF)
•    Parts of Horizon 2020 – Smart, green, and integrated transport + Secure, clean and efficient energy
•    Legacy programmes: TEN-T and Marco Polo 2007-2013
INEA's main objective is to increase the efficiency of the technical and financial management of the programmes it manages.

The Programme supported several development intervention within the Port of Venice.
Interventions connected to the strengthening of existing infrastructures (commercial port area) were concluded in 2012.
New initiaves have taken shape in 2013 with the main object to enforce Port of Venice infrastructural capacity:
•    The Implementation study to prepare a PPP to improve the capacity at the Port of Venice and related logistics system (2011-IT-94006-S) connected to the on-shore/off-shore system
•    ADRIAMOS Adriatic Motorways of the sea (2011-EU-21001-M)– for the new Ro-Ro Terminal)
Meanwhile, a common ICT prototype for the Northern Adriatic Ports was completed in 2013 (ITS NAPA)

The overall objective is the adoption of the national Maritime Single Window and electronic data transmission for the fulfilment of reporting requirements for vessels entering and departing European ports in accordance with EC Directive 2010/65/EU.

The North Adriatic Ports (Napa) of Venice, Trieste, Koper, Rijeka (as observer), the Rete Autostrade del Mare (RAM), and the Port of Ravenna agreed to develop a study to analyse the possibility to set up a multiport gateway for North Adriatic Ports. This includes a market study as well as ICT solutions enabling an efficient information exchange between the north Adriatic ports and all the actors involved within the intermodal transport processes. The market study proved that the NAPA ports have a potential market of 6 million TEUs in a long term horizon up to 2030. The growth of the NAPA traffic flows would help rebalancing the whole EU container market presently unbalanced towards the more northerly ports. The project will also create a prototype of a common e-platform and develop a north Adriatic ports web portal for data sharing.

The study is aimed at developing preliminary legal, financial, and technical studies necessary to advance the Venice port development plan. It consist of the design and implementation of an offshore and onshore terminal as well as the related waterway transfer system and to prepare the ground for the rendering procedure for the design, construction, financing, operation and maintenance (or other forms of Public-Private Partnership) of the offshore terminal, onshore terminal and waterways transfer system.

The project is focused on public-private partnership preparation activities which should help the Venice Port Authority (VPA) to lead more detailed value for money assessment of the project and attract private operators to apply for the future tender.

Adriamos Ro-Ro terminal intends to support the transport of trucks, unaccompained trailers and cars by Ro-Ro and Ro-Pax ships between the North Adriatic area and the cluster of Greek Ports of Igoumenitsa and Patras.
This will strenghten the efficiency of transport services between the two areas and further foster modal shift from road to maritime transport. In the Port of Venice, the intervention will foster ferry traffic to and from a new Ro-Ro Terminal in the Fusina area that will allow it to play a central role as a logistics platform.

The project aimed to restructure and strenghten the Port's railway facilities. Thanks to the project, the rail terminal is now capable of handling up to 50 trains per day, each up to 700 metres in length - a key factor which has allowed the rail freight operator to establish new rail links between the Port of Venice and the Padua and Verona villages in the region.

A regional system is being developed to connect the port of venice with the freight villages of Padua and Verona. This, in conjunction with the parallel deepening of the port canals for larger container ships, has resulted in the port doubling its rail forwarding capacity, i.e. roughly 12,800 tonnes of freight. 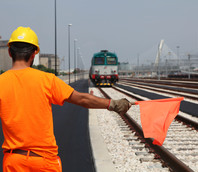 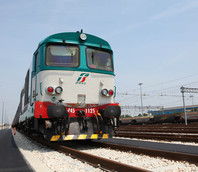 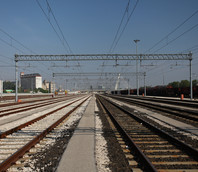 Port of Venice Railyard's presentation (IT Lang.)
Functional adaption of both road and rail networks in the stretch Malcontenta - Fusina of "Via dell'Elettronica" in the Porto of Marghera - Venice (2008-IT-91407-P)

This action involved the strenghtening and developing of the existing road and rail infrastructure connecting the new Fusina Ro-Ro (roll on, roll of) terminal (operative as of 2014) with the main  national and local road and rail networks, in order to enhance the interconnections of the Fusina area and achieve a better quality of service in terms of capacity, frequency, safety, environmental protection, quality and cost in response to the market expectations.

This project consisted of infrastructural works to dredge the West and South Industrial canals to a depht of 10,5 metres in order to improve the nautical accessibility in the port of Venice-Marghera. This will allow  vessels of higher tonnage to access the port facilities and thus to develop maritime and comodal transport. Furthermore the project aimed at reducing  the environmental pollution of the lagoon by removing the contaminated sediments from the two canals.