The port areas of San Basilio and San Marta were created in 1896-97 as part of the larger project to build the new port of Venice, following the construction of the railway bridge in 1846.
The surface covered was of around 26,000 m2, split up into nine warehouses and other smaller buildings designated for use as the offices of the Free Zone, of the Port Superintendent, of the Inspectorate of the Inland Revenue, the Police and other port services. Their structure consists of vertical brick elements and iron columns, with wooden floors and roofs. The new venue of the Venice Port Authority was one of these warehouses, and is situated on the ‘Santa Marta’ side, a popular neighbourhood which according to historical and iconographical sources is of relatively recent construction (early 20th century), designed to house railway and port workers. 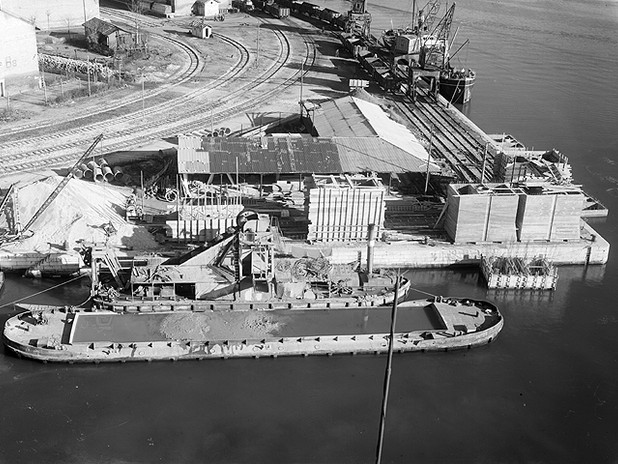 In the neighbourhood, we find the structures and fixtures linked to the presence of the railways: to the North the structure housing the Officina del Gas (Gasworks), created around 1900 in an area obtained thanks to the reclamation of the Angelo marshland; to the East, the ex Cotonificio Veneziano (Venetian Cotton Mill), built between 1882 and 1900, and today exploited as a university venue; to the South the General Warehouses, built between 1875 and 1885 on what was once the beach of Santa Marta (the “Arzere di Santa Marta”) and other buildings which hosted numerous other activities linked to the port. The project foresaw the construction of three rows of buildings parallel to the long side of the quay on the Giudecca Canal, covering a surface of around 8,400 m2. The buildings were together made up of a central body, developed on two floors and used as a space for offices and housing, and two lateral buildings, used for the wrapping and stocking of goods. In 1885, with the increase in demand, the warehouses underwent major enlargement, ultimately covering a total surface of 18,150 m2. Between 1928 and 1930, two railway lines were built along the quayside, thus altering the layout of the space considerably.